The Comprehensive Nuclear-Test-Ban Treaty (CTBT), which bans any nuclear weapon test explosion or any other nuclear explosion, was opened for signature on September 24, 1996. As of January 2012, the Treaty has been signed by more than 180 countries worldwide, of which more than 85% of these countries have now ratified the treaty. This total includes 35 of the 44 States listed under Article XIV as States that must sign and ratify the CTBT before it can enter into force. Canada was one of the first countries to sign the Treaty on September 24, 1996, and two years later ratified it on December 18, 1998. To verify that States are complying with the Treaty, the CTBT provides for a global verification regime to monitor the globe - underground, in the atmosphere and underwater - for nuclear explosions. To this end, a network of 337 monitoring stations distributed worldwide is currently being constructed.

This International Monitoring System (IMS) includes a primary and auxiliary network of seismic stations, a network of underwater hydrophones and land-based T-phase stations, an infrasound network of microbarometer arrays, and a network of a radionuclide monitoring stations. These individual components are linked by a global communications system, which relays data and communications to the International Data Centre (IDC) in Vienna, Austria. As of January 2012, some 270 IMS stations (80%) have been installed and certified for operation by the Comprehensive Nuclear-Test-Ban Organization (CTBTO) Preparatory Commission, with 17 newly completed stations undergoing certification testing (5%), and another 22 stations currently being constructed (6.5%). For the most current information regarding Treaty radifications, the status of the IMS network, and the CTBT in general, visit www.ctbto.org.

To ensure CTBT compliance in all environments - underground, underwater, and in the atmosphere, an International Monitoring System (IMS) of sensor platforms incorporating four different technologies have been developed and are being deployed around the globe. These technologies comprise seismic instruments (measuring acoustic vibrations in the earth), hydroacoustic instruments (pressure waves in the oceans), infrasound (pressure waves in the atmosphere), and radionuclide (minute traces of radioactive particles in the air). Canada, as a ratified member State of the CTBT, supports all four of these technologies. More detailed information on the various monitoring systems can be obtained from the CTBTO Preparatory Commission in Vienna, Austria. 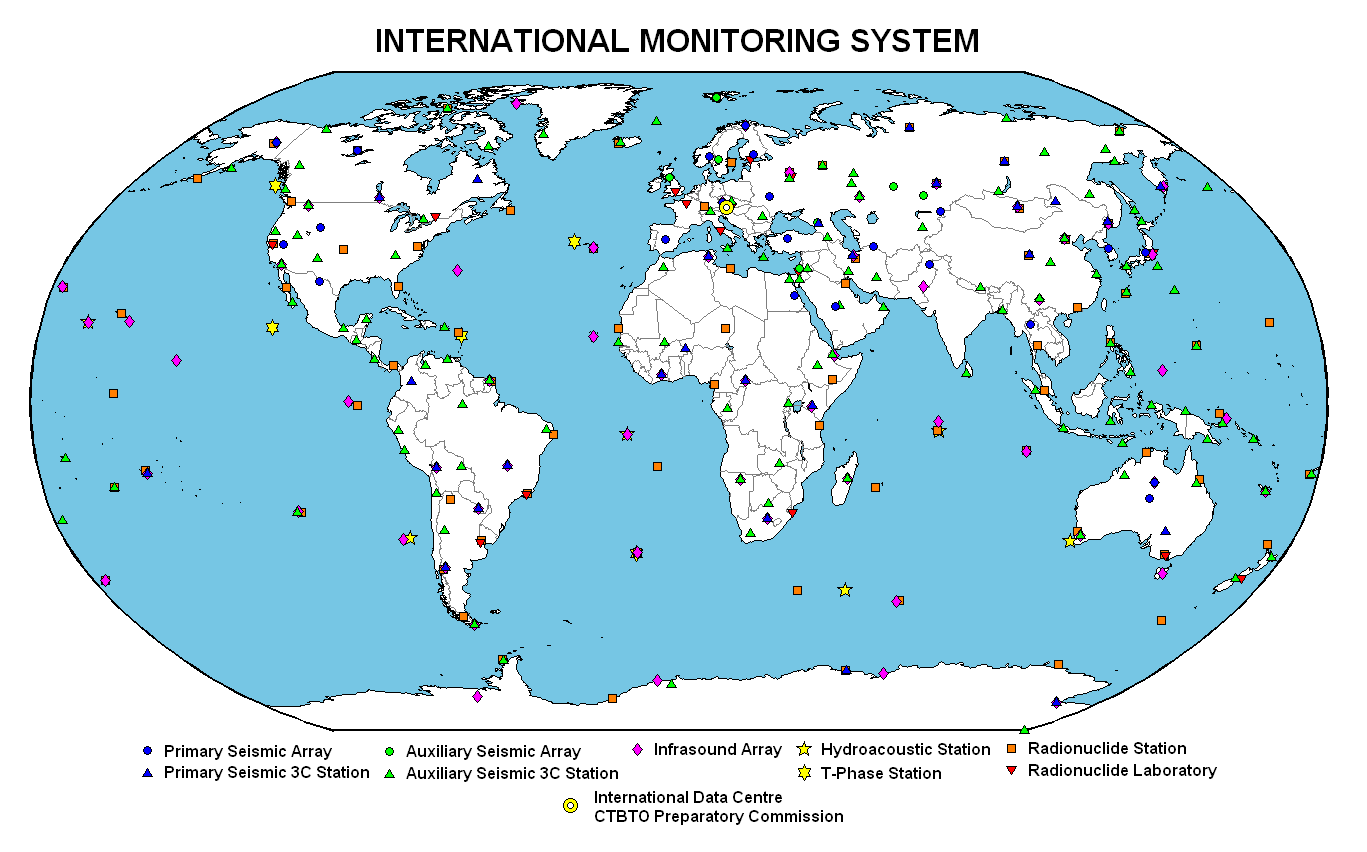 In support of the Canada's commitment to the CTBT, the Comprehensive Nuclear-Test-Ban Treaty Implementation Act (Bill C-52) was passed on December 3, 1998. This act designated several National Authorities to implement Canada's contribution to the IMS and meet with the CTBTO Preparatory Commission regarding CTBT related issues. In Canada, Natural Resources Canada (NRCan) is designated the National Authority responsible for the operation, installation, and maintenance of all IMS facilities related to seismological, infrasound, and hydroacoustic monitoring. NRCan is also tasked with setting up and operating the Canadian NEM Data Centre for the exchange of IMS data with the International Data Centre (IDC) in Vienna. The National Authority responsible for operating a radionuclide laboratory and the four radionuclide monitoring stations in Canada lies with the Radiation Protection Bureau of Health Canada. 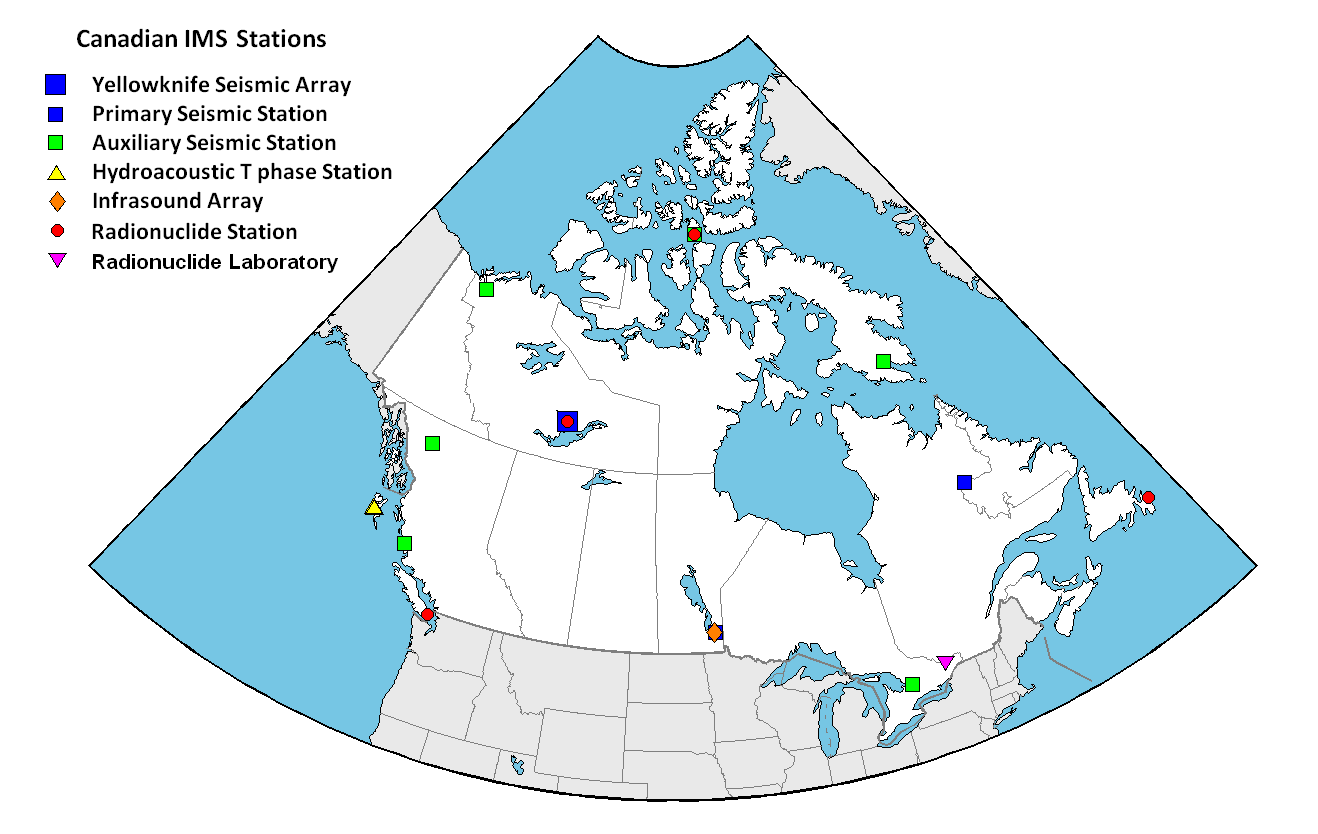 For an overview of the various IMS technologies, and to see maps of the worldwide distribution of monitoring stations for each, click on one of the images below.

Links Related to the Treaty