A facility for Research in Seismology and Nuclear Explosion Monitoring

The seismological array located near Yellowknife in the Northwest Territories was established in 1962, in cooperative agreement between the Department of Mines and Technical Surveys (now Natural Resources Canada) and the United Kingdom Atomic Energy Authority (UKAEA), to investigate the feasibility of teleseismic detection and identification of nuclear explosions using multiple seismometers in distributed arrays. Since then, the Yellowknife Seismological Array (YKA) has recorded tens of thousands of seismic events worldwide, including most of the underground nuclear explosions detonated by the nuclear weapons states. The Yellowknife array is Canada's flagship installation for research on Canadian and global earthquakes, and is this nation's principal contribution to the International Monitoring System that will be used to verify compliance with the Comprehensive Nuclear-Test-Ban Treaty (CTBT).

The first multilateral negotiations on a CTBT took place in Geneva in 1958. These negotiations failed because the experts could not agree on the monitoring system that would be used to verify compliance with a ban on underground testing. The United States, the UK and a number of other countries immediately began research programs on the seismological detection and identification of underground nuclear explosions.

The United Kingdom research program, operated by the UKAEA, was devoted to the development of seismological arrays, which act as seismic antennas to "tune" into seismic vibrations originating from particular parts of the Earth. This provides an array with the capability to improve detection and to independently determine the location of a seismic event. Four such arrays with apertures of 25 km, designed for optimum detection of seismic events at distances between 3,000 to 10,000 km, were installed by the UK in Scotland, Australia, India and Canada (Yellowknife). The Dept. of Mines and Technical Surveys, the predecessor of NRCan, received funding and Cabinet approval to operate the Yellowknife array as a research facility for seismological verification. This work has now continued for the past 50 years, and is currently carried out under the Nuclear Explosion Monitoring project in the Geological Survey of Canada.

In January 1995, an experimental version of the current IMS seismic monitoring system was put into operation. The Yellowknife seismological array was found to be one of the most sensitive of the 115 global seismic installations contributing to this prototype system, and so in August 1995, YKA was chosen by the expert group advising the negotiating committee as one of the primary components for the seismic network of the International Monitoring System. 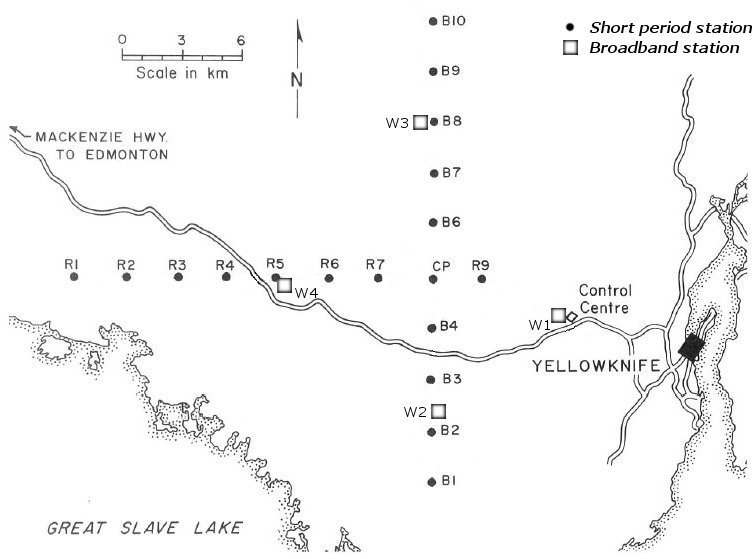 A seismograph or a seismological array is most sensitive to distant seismic events if it is located in an area which is "seismically quiet". This often means an area sited far from ocean coast lines, in a stable geological setting and as far as possible from human sources of seismic noise, such as vehicle traffic and heavy equipment. An ideal site was found in 1962 on the outskirts of the town of Yellowknife, NWT.

The Yellowknife seismic array currently consists of 19 short period seismic sensors in the form of a cross with a 2.5 km separation between seismometers, plus four broadband seismograph sites with instruments able to detect a wide range of seismic wave frequencies. Continuous measurement of the ground motion by these sensors is digitized at the site and transmitted by radio links to the array control centre. At this control centre, the data are both stored on permanent optical disk archives and transmitted by a dedicated ANIK satellite link to the Seismological Laboratory in Ottawa. In Ottawa, computers continuously monitor the incoming data stream searching for signals indicative of distant seismic events. When such signals are detected, processing of the entire array data set allows a time of occurrence, a seismic magnitude and a geographical location to be assigned to the event. With very small time delays due to data transmission and computing, staff in the Nuclear Explosion Monitoring project know these details of distant seismic events within minutes of their detection by the array. To support the development of the CTBT International Monitoring System (IMS), continuous data from the Yellowknife Array (YKA) and the single seismic stations ULM and SCHQ are forwarded in near real-time to the International Data Centre (IDC) in Vienna as part of the primary seismic network of the International Monitoring System.